The Airhead Montana Inflatable Kayak is very easy to transport, and once you’ve set it up the dashing orange color makes it quite easy to fall in love with it. But you don’t the base purchase of an inflatable kayak solely on portability and looks—you need to see how it performs on the water.

You need to see what your money is getting you, although admittedly you won’t have to spend all that much when you buy an Airhead Montana Inflatable Kayak. 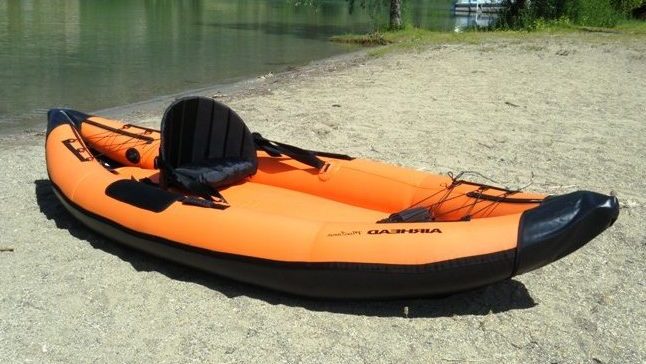 The Airhead Montana Inflatable Kayak isn’t big. It measures 9 feet 9 inches in length and weighs a paltry 27 pounds. Because it’s not all that big, its load capacity is set at a maximum of 300 pounds.

There isn’t much storage space on the boat, either. The stretch netting has some room for a dry bag underneath it, and you can secure your gear with the 6 D-rings. You can also place some lighter stuff over the stretched netting in the bow as long as you tie it down securely.

The Airhead Montana Inflatable Kayak is made from 840-denier nylon and it comes with water-resistant and UV protection coatings. In addition to the front and back, you’ll find grab handles on both pontoon sides. Not many single-seat kayaks have this convenient feature that makes it easy for even one person to lug around an inflated kayak.

The seat is inflatable and easy to adjust. It can be comfortable, but those who are encountering stability issues in the seat may want to refrain from inflating it to full capacity.

Unlike most other inflatable kayaks, the Airhead Montana Inflatable Kayak comes with neoprene elbow guards on the sides. They’re quite comfortable when you need to rest your hands, arms, and elbows on them.

It also has a foot rest attached at the front, which can be adjusted according to your height.

Despite the short length of the Airhead Montana Inflatable Kayak, it’s quite wide. This makes for a very stable kayak that’s easy to paddle and maneuver. It’s very responsive, and paddling isn’t a problem on flat water and on smaller choppy waters.

The tracking isn’t all that impressive, however, and you won’t be able to go as fast as you may want to. You’ll get where you want to go and you’ll have a lot of fun doing so, but the journey won’t be as quick as you may want it to be.

So overall, despite its name the Airhead Montana Inflatable Kayak makes for a very sensible purchase for beginners who want to have fun on the water in style. There’s also a 2-seater version which can carry more weight, is two feet long, and weighs 9 pounds more. But whatever version you buy, you can be sure that you’re getting an inflatable kayak that’s easy to carry and is quite maneuverable and fun when on the water.