I hope you spend more time using your knife than your gun – find a good one.

As hunters, we give a lot of attention to our primary weapon. We compare, search, discuss and divide over our preferred hunting weapons.

The rifle we carry into the field can be anything from a carefully selected instrument of precision, to a legendary family heirloom handed down with stern trust. 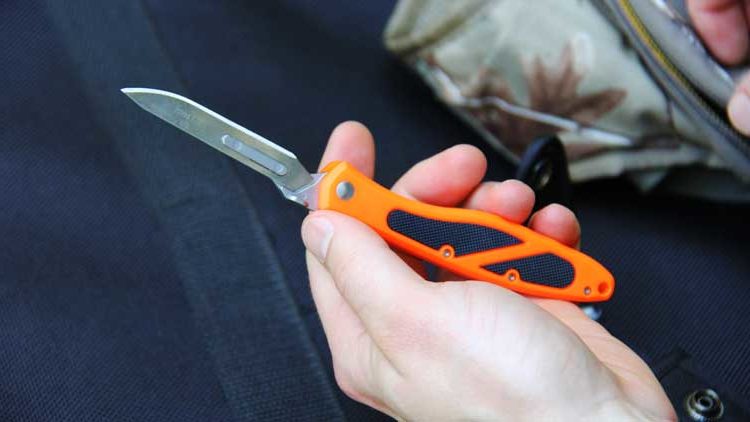 No matter the back story, it’s not just any rifle – it’s my rifle. There are many like it, but this one is mine. If you think guys take their rifles seriously, that’s only because you don’t know many bowhunters.

Few things will divide a room of hunters like the bow versus gun conversation, and then which brand of each will subdivide the two groups into dozens. We hunters are (foolishly) serious about our hunting styles and brands of choice. We give lots of attention and glory to our hunting weapon of choice.

With all the attention that goes into the hunting weapon, it’s always struck me as unbalanced. We’ll deliberate and dissect which rifle is the right one for us. We spend hour after hour practicing shooting and honing their skills.

We bust our tails, investing hundreds of more hours to connect on a nice animal. Then, they’ll walk up to the downed animal, set our pack and beloved killing tool on the ground next to it, and then… oh yeah, then… we whip out some cheap POS knife we got in a Christmas stocking three years ago and haven’t sharpened since. Ugh. Then the hacking commences.

I made a decision a long time ago:

If I’m going to invest this kind of money, time, and effort into preparing to hunt a deer, I’m surely going to put a similar effort into my knife and process for once I kill the darn thing!

It’s my hunting knife that turns a deer into the meat. I want my knives to be ready and sharp. A good knife speeds up the process and makes things easier once an animal is down.

As hunters, we’ll probably spend a lot more time on our hunt putting that knife to work than we will our bow or rifle (if you don’t count practice), so maybe we should take our knives more seriously?

What makes a good hunting knife?

In a few minutes, I’ll explain why no one knife can do everything well. But in general, there are two key features you’ll want to look for in your hunting knife no matter the situation.

First and foremost, if the knife doesn’t have good quality steel that will hold an edge and stand up to a long period of use, walk away.

The definition of “good steel” is relative to how you want to use the knife. My Havalon knives use very thin, very sharp, and slightly flexible blades to make precision cuts. My boning knives have long, semi-flexible blades that have some flex but still hold an edge. And my heavy duty knives have very stiff, very hard steel that holds an edge under serious use.

Different steep for different purposes, but they all had better hold an edge when used as they were intended.

If the knife is going to slip, hurt, pinch, rub, or irritate your hand while you’re using it, it’ll wind up injuring you or being tossed in a junk drawer. Don’t waste your time or money on knives that don’t offer a solid grip. 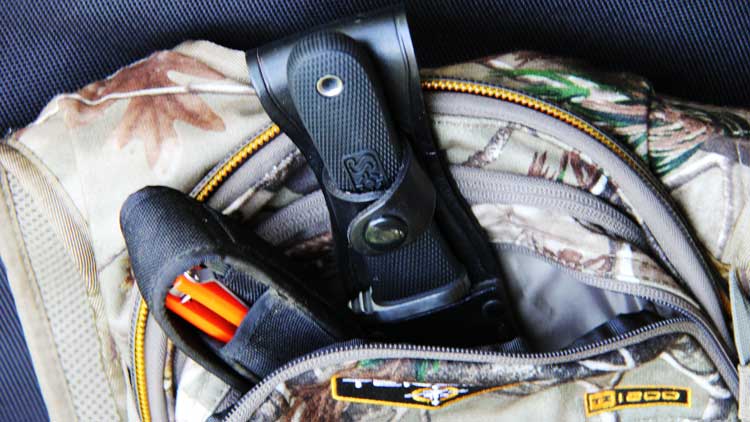 Why I Use More than One Knife

Surprise! No one hunting knife can do it all. That’s right; your eight inch survival knife with a saw-back may not be the best fit for everything you’ll need in a knife as a hunter.

I use my knives for everything from slicing raw meat and making precision cuts, to chopping branches out of my shooting lane and splitting ribs. One knife can’t do all of that well.

I’ve found it’s worth a little extra space in my pack to carry two or three types of knives that cover most all of my hunting situations.

#1 – A Knife for Field Dressing

Skinning and field dressing a game animal is actually a fairly delicate job. I like to use a smaller, more nimble knife for field care of the game. I keep in my pack a thin bladed, precision knife that I use only on game animals.

And I cut raw meat, separate joints and tendons, and remove capes with this knife.

It stays razor sharp and usually remains put away until there is an animal on the ground. This is also a small knife, preferably with a 3-3.5” long, thin and pointed blade for making careful cuts.

Along with my finesse/field dressing knife, I carry a utility knife at all times, for little jobs that come up along the way. From cutting rope to marking trails, opening cans of chili, and making marshmallow roasting sticks for the campfire, it’s my all-around use knife.

No more than four inches, with a sturdy, drop point blade. I alternate between a small fixed blade knife in a belt sheath and a folding pocket knife with an easy one handed opening for utility purposes. They both have advantages.

My utility knife does not go in my pack and stays at an arm’s reach at all times, it’s usually the same knife I carry with me in my pocket every day.

I also keep a knife in my pack for heavy work, so as not to break or ruin the first two knives or in the off chance I lose one of them. If I need to clear brush in a small ground set, split some kindling, or dice my way through backstraps at supper for a crew of rednecks, this is my go-to.

A heavy, sharp, stainless blade that cleans easily and will get a lot of work done in the right hands.

The Butcher’s Secret: Let the Blade Do the Work

I wish I could remember where I learned to let the knife edge do the work, it’s probably just a lesson of attrition through the years. The sooner you can learn to let the knife’s blade do the cutting and not your elbow, you’ll be much happier – it’s truly the butcher’s secret.

If you’ve ever hacked, poked, and pried your way through quartering up a deer, you know what I mean.

If I’m having to press and dig in as I process a game animal, I’m doing it wrong. Watch a good butcher do his thing sometimes, he slides through an animal in a fraction of the time with smooth precision, not fighting it at any point.

He’s letting his knife do the work, he’s just guiding it to the right places.

It’s amazing how delicately large game animals are held together. Once you learn where to cut, a simple slicing action from a sharp knife will get the job done faster and cleaner than forcing cuts where they don’t belong.

Pay attention to tendons around joints, connective tissue, and natural separation of muscles, and you’ll be able to process and debone an entire deer in the field with nothing but a small, sharp finesse knife. 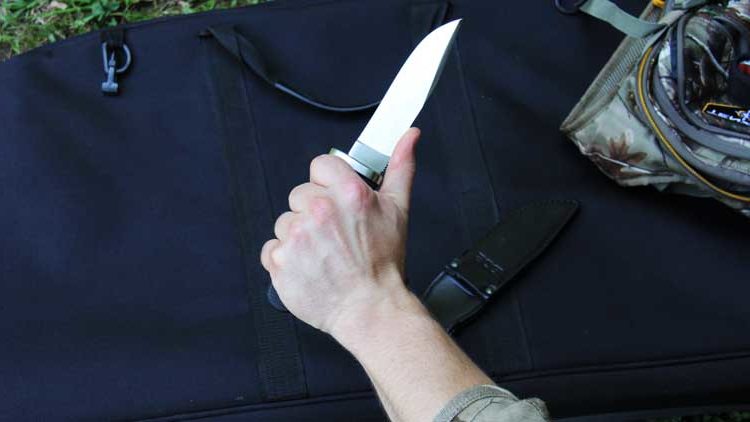 One last thing to decide is whether you want to use a fixed blade or a folding knife. I prefer folding knives for light duty work and my heavy duty knives are always fixed blades.

More versatile for packing and ease of reach, folding knives have a serious advantage if you need to keep them handy. The downside is that they aren’t as durable as fixed blade knives and will not hold up to heavy use. Folding knives also offer more nooks and crevasses for bacteria to grow, and thus require much more detailed cleaning.

More rugged and durable, fixed blade knives work well when you need a tough, reliable tool. Make sure the knife is a full-tang model (where the blade steel goes all the way down into the handle) to ensure strength and prevent failure under heavy use.

Fixed blades are a little harder to pack, and can be cumbersome when worn in a belt sheath if you plan to be sitting during the hunt. Overall, fixed blade knives will last longer and give you years of reliable service.

Your knife is important.

It’s the tool that is going to transform that wild animal into table fare, open your camp coffee in the dark at 4 am, and keep you in kindling for the fire. You’ll use it a lot (if you’re lucky), and it deserves serious attention.

A good hunting knife really is man’s other best friend.

Pro Tip: Havalon, Havalon, Havalon and oh yeah, HAVALON. Featuring easily replaceable, razor sharp blades, you’ll never have to worry about a dull knife again. Trust me, this should be your next hunting gear purchase. At around $30, it’s worth three times the investment. 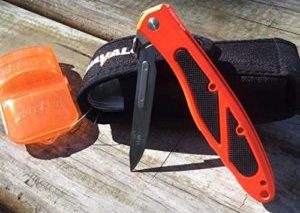 Havalon Piranta-EDGE. It’s lightweight, so I can pack the knife and several extra blades in my pack and never notice.

It’s Blaze Orange, meaning you’ll never lose your knife in the leaves again. I also use a SOG NW Ranger. It’s a large, heavy duty knife that will work as long and hard as I ask it to.

8 Best Hunting Binoculars for the Money 2021