I have been shooting a QAD drop-away rest for years, and although I haven’t had any problems with it. So I decided to move in a new direction for my 2021 Elite bows.

I wanted something quieter, easier to set up and tune, and simpler in design. I did a lot of research to find the best limb-driven, full containment arrow rest for my needs, and I settled on the Trophy Taker Smackdown Pro. 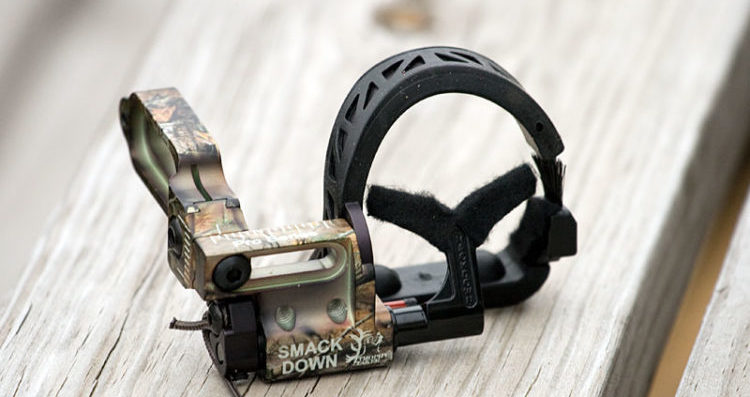 The Benefits of Limb-Driven Rests

Before I dive into the review and explain why I chose to use a limb-driven rest, it is important to note that the Smackdown Pro allows for a variety of configurations – including lower limb, upper limb, upward cable, and downward cable driven setups.

However, since a limb-driven rest needs tension to fall (not rise), the launcher is always going to fall at the right time, according to the bow’s limb movement.

Timing a limb-driven rest is as simple as ensuring that the rest’s cord is under tension while the bow is at rest, and that the launcher is completely down.  That’s it.

Another downside to a cable-driven rest is that it loads the bow’s cables with additional torque as the rest’s cord is pulled tight.  This torque can affect the bow’s timing, and obviously a limb-driven rest avoids this.

Finally, a limb-driven rest supports the arrow longer throughout the shot than a cable-driven rest.  This additional support allows the arrow to stabilize during the launch sequence, which translates to a more consistent flight downrange. 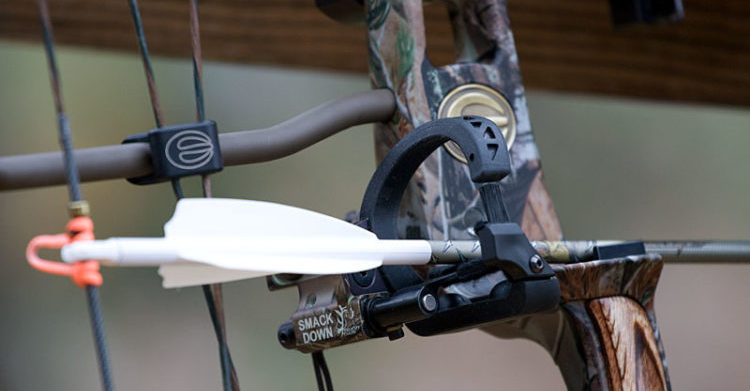 The Smackdown Pro is, without a doubt, the quietest rest that I have used. The rest is silent throughout the draw cycle, thanks to the Smackdown’s internal dual bearings.

The steel launcher is fully wrapped in a fleece-type material, and upon the arrow’s release the launcher falls into built-in rubber dampeners.

The rest’s containment ring is also coated in silent rubber material. There’s no “spring” or click noise with the Smackdown Pro; I can’t say the same about my QAD. 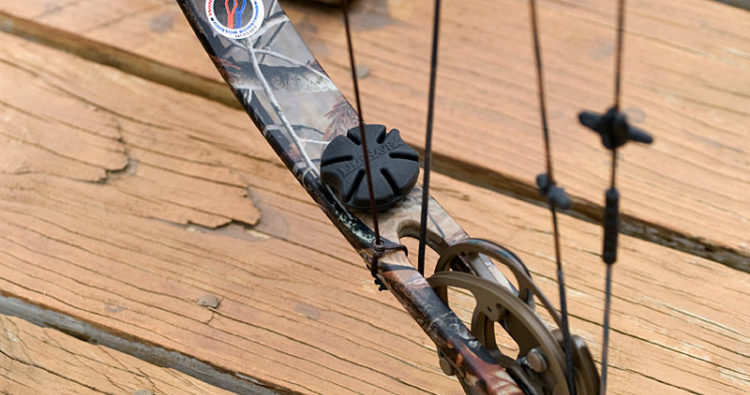 The Smackdown Pro comes with a universal limb clasp to attach the rest’s activation cord, but as you can see in the photo above, I simply tied the cord to my lower limb.

When using the tie-on method, the cord can then be tightened by using the set screw on the rest’s body, which makes it easy to fine-tune the tension, or even repair the rest in the field, if necessary.

Speaking of the rest’s cord, the only complaint that I have with this rest is that the cord stretches quite a bit when it is first installed.

But it is a minor inconvenience since tightening the cord takes just seconds.

While we are on the topic of attaching the rest to your limb, I should mention that it makes no functional difference if you decide to attach the cord to the top or bottom limb.

There are reasons that some choose one limb over the other – such as routing the cord around a quiver, or making sure that the cord isn’t in your sight picture at full draw – but as far as performance is concerned, it doesn’t matter.

One of the main reasons that I chose the Smackdown Pro over other full-containment, limb-driven rests is because Trophy Taker has a long history of producing solid, durable, and reliable rests.

The Smackdown Pro features high quality bearings and all-metal construction, but due to its sleek and low-profile design, the Smackdown Pro is also a lightweight addition to your bow.

When you talk about Trophy Taker products you can’t overlook the fact that these products are developed and tested by extremely dedicated and accomplished hunters, built right here in the US, and backed by an unconditional warranty.

I simply have more trust in the Smackdown’s design and construction than I do in other rests, which means that it is my rest of choice for critical hunts, such as my upcoming elk hunt.

I’m obviously a fan of this rest.  So much so that I have bought two of them. If you are looking for a versatile, durable, and quiet rest, with an unconditional warranty – then be sure to consider the Trophy Taker Smackdown Pro.