However, when using other indoor/outdoor devices it’s important to put safety first. This will make the trampoline as safe as it is fun. As when doing other activities it’s critical to know what to do and what not to do. That will help you to stay as safe as possible when using a trampoline.

Here are some of the most important dos/don’ts when using a small or big trampoline indoors or outdoors:

What to Do When Jumping on a Trampoline 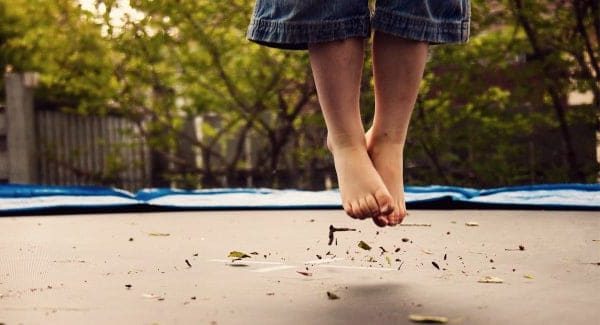 1. Remove jewelry and everything from pants pockets

Jewelry can become dangerous when jumping on a trampoline due to the sharp edges. It can cause injuries to the face, for example. That’s certainly a situation you’ll want to avoid.

2. Use safety pads to cover the metal pieces

This is important. It’s important to cover all metal structures on the trampoline. That includes springs, bolts, and other pieces. Besides covering the metal, it’s also important to repair damaged or broken springs. This can cause various types of hazards and even affect the functionality of the trampoline.

The springs are one of the most important metal items to cover. That’s because when kids jump there’s a chance they could get their arms/legs caught between the springs. These potential problems can be avoided by simply covering the items and replacing damaged parts.

It’s important to use padding that’s a different color from the trampoline, so they can be spotted easily while jumping on the trampoline.

3. Jump in the mat’s center

What NOT to Do When Jumping on a Trampoline

Don’t put the trampoline near anything

It’s important that the trampoline isn’t close to anything, such as trampoline, wall, fences, trees, and so on. This is important as it will help to avoid injuries when people are jumping on the trampoline. For example, they might hit one of the objects by jumping, or be injured worse if they fall off the trampoline.

One key issue is to remove any stool or chair that’s used to get onto the trampoline. People often forget to remove the item, and it can cause a safety hazard if the jumpers fall into the items or accident jumping onto them.

Don’t put anything under the trampoline

This is important for various reasons. IF there’s something under the mat, it could cause accidents if the jumpers jump too strongly and hit the object under the mat. That can cause various types of accidents, including those to the back, neck, and joints.

If jumpers ever feel sleepy, ill, or dizzy, it’s important that they stop jumping. That’s also true if they’re experiencing a stomachache or headache. It’s important that kids, teens, and adults all stop if they have such medical conditions. That’s because jumping on the trampoline could cause a lot of problems and make the situation worse. Jumping on a trampoline can be fun, but it’s important to avoid major medical issues.

A trampoline can be quite a fun device for kids, teens, and adults to use. By following some basic do’s and don’ts you can make sure that trampoline jumping is not only fun, but also safe. That’s because injuries are never fun.