If you’re just getting into kayaking, then the Sea Eagle 330 inflatable kayak is ideal especially if you intend to go with a friend and you’re on a limited budget. It costs less than $300, and that’s before any sort of sale or discount you might stumble upon.

And what you get with your money is an inflatable kayak that can carry two people with a combined weight of less than 500 pounds.

The Sea Eagle 330 inflatable kayak is 11 feet two inches long and 2 feet 10 inches wide, and it weighs 26 pounds. The price also gets you everything you need, as the entire package includes the seats and paddles, a carry bag, a repair kit, a manual, and a pump.

Portability and Setup of the Sea Eagle 330 Inflatable Kayak 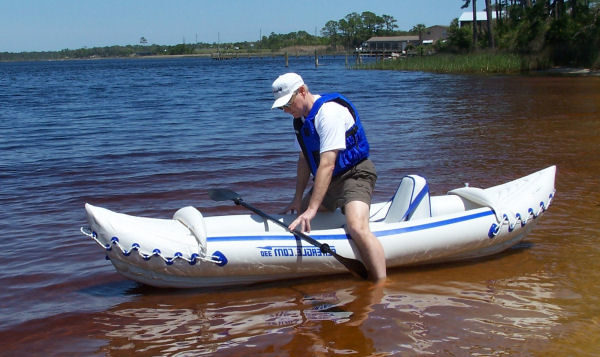 It only weighs less than 25 pounds, and the carry bag makes it easy to lug around or store in the trunk of your car.

You will need about 15 minutes to get the boat fully inflated, but with lots of practice you can cut it down to about 10 minutes. That’s if you use the Bellows pump; use an automatic air pump and you can cut the prep time even further.

One of the more common complaints that people who use inflatable kayaks is that most affordable kayaks of this type tend to be shoddy.

It’s somewhat expected that in a very short while holes will develop and rips will appear along the seams. These rips can’t really be properly repaired, and you’ll need to buy a new one after a year. 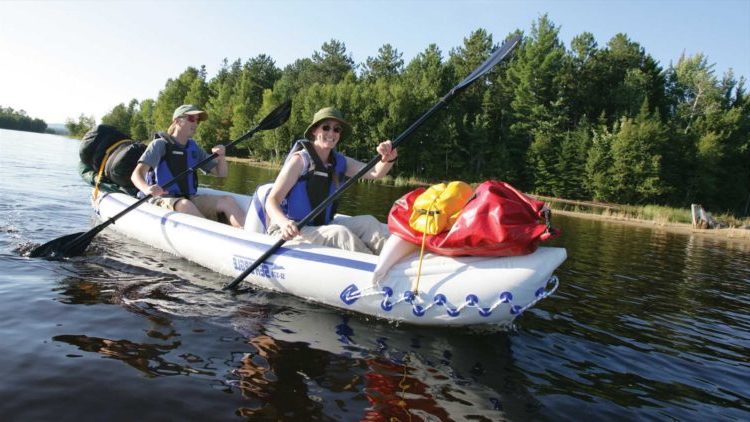 You can say goodbye to that kind of complaint with the Sea Eagle 330 inflatable kayak, because it’s quite durable and sturdy. It’s a soft-sided boat (once you inflate it you can press a finger about half an inch or so into the boat), which makes it able to resist impact with logs and rocks without sustaining a puncture.

Most of the damage it will accrue will come from dragging it across rock-filled river shorelines, which you can easily avoid simply by carrying the boat instead.

The fabric is also not quite able to handle subzero temperatures. While it won’t get damaged when in storage, inflating it at below freezing temperatures will cause some damage to the fabric.

It is rated to handle up to Class III rapids. It tracks well when used in larger bodies of water, and steering is easy in smaller waterways like ponds and lakes. You can even use it as a fishing platform, especially for spin fishing.

For fly fishing, you will have to adjust your cast in order to compensate for the low height of the seating.

The Sea Eagle 330 inflatable kayak is rated for a total capacity of 750 pounds, which means you’ll have some storage space for a lot of gear.