Does your child show intrinsic interest in playing with Trampoline?

If yes, this is the piece for you. Trampolining is a better exercise than jogging and running for fitness. In addition, kids are fascinated by this game because it’s down to earth.

Without much effort, they can learn to play the trampoline naturally.

Since this widely practiced play has some potential hazards to be warned of, knowing some tricks or technics always aids the kids in safe play with trampoline and to have fun to its fullest extent.

It is advisable for the parent to be with their kids while playing with this device in the beginning days. 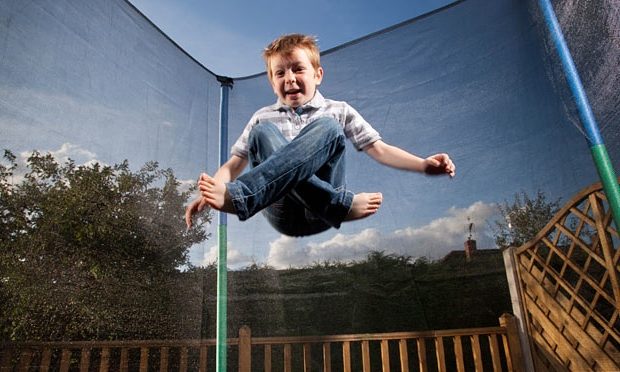 The basic tricks in playing with the good trampoline include Seat Drop, Back Drop, and Knee drop.

Some Tricks to Train Your Kids

Seat Drop is a trick that can be intrinsically performed by kids.

Start practicing this trick by bouncing at the outset. Establish the bounce by keep on jumping for a while. Continue jumping, putting your feet together, pressing on the Fabric of the Trampoline, with your toes. After you get some fresh air while doing this.

When you go down, land on your rear end. Push with your hands against the fabric and go up. In the next turn land on your feet. That’s it, this is called Seat Drop. It is very easy and can be learned without much effort.

The Back Drop is the trick in which the jumper once establishing the bounce, lands on his back not on the rear end, but on the entire back.

He then pushes his body against the Fabric of the Trampoline and gets enough energy to bounce. After bouncing he straightens his body and lands in a standing position. He repeats this and it is called Back Drop jump.

The Knee Drop is the third Technic which kids feel at ease in performing. Keep jumping for a while, in the next turn land on your knees.

Don’t tilt on either side, front or back. Keep your back straight and land on your knees with hips right above your knees. Point your feet on the Fabric push your knees against the Fabric of the Trampoline and bounce back.

When you are bouncing back straighten your legs and finally land on your feet which means in a Standing position. Practice this again and continue.

After learning the above-said tricks, one can practice a trick called Hands and knees Drop. It appears like Knee Drop but since the jumper uses his hands too in landing, so it is called. Jump for some time, after you get some fresh air while jumping, land on your knees and hands distributing your weight evenly.

Push yourself to the Fabric with your hands and knees, and bounce. While going up straighten your body and land in a standing position. And keep doing the same.

There is a variety of jumps for those kids who mastered the above explained tricks. Flip, Straddle and Pick jumps are some of them.

The flip is a kind of jump that is a bit complicated and one should be careful in doing this. There are two Flips, Front and Back Flip. In Flip jump, once the jumper bounces, he makes acrobatic movement in the air and finally lands in a standing position.

To say simply one does a forward somersault. And just before he lands he straightens his body and lands on his feet. Sometimes on his back.

To practice Front Flip, jump for some time to make yourself tuned to Trampoline. A good Front Flip jump starts with a good straight jump with your arms up above your head and your body.

As you rise you begin to lead into your hollow body position and hunch. You will make an acrobatic movement forward in the air and finally, you will land in a standing position.

In the BackFlip trick, you will rise after several good straight jumps, and hunch backward when bounce.

And finally, you will land in a standing position.

To do a Straddle jump, first do some good straight jumps. In the next turn, when you rise, stretch out your legs to both sides of your body and touch your toes.

The success in doing this trick lies in the timing. You have to do this entire stretching the legs and touching the toes task when you are in the air. After you touch your toes straighten your legs and land in a standing position.

Pike jump is a variety of Straddle jump. In this jump, you try to create a Pike with your legs before your body while trying to touch your toes. As one practices the Straddle jump, one tends to practice this jump as he gets somebody’s flexibility with the Straddle one.

These are the Trampoline playing Tricks for kids. However, it is suggested for the parents to be with their kids while practicing these and until they master playing with Trampoline without getting hurt. 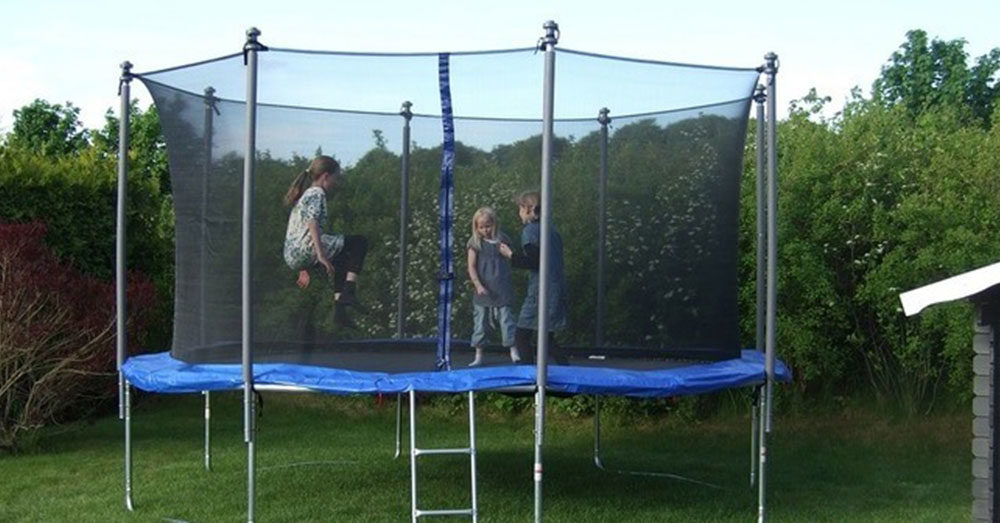 Many people and their families are into fitness and having fun together. A trampoline is one of those really popular ways to do it. Out in the backyard with everyone on the weekend including the dog!

A trampoline is not only a great form of family fun; it really is one of the best ways to tone and strengthen your whole body. If you have ever tried it, you know that it looks far easier than it is.

You are using every muscle to keep on it which is why you see those giant nets. The trampoline nets are important not because people can’t be trusted to stay on them but because it is awful easy to lose your footing and oops!

The trampoline nets are an important necessity for having a trampoline. You have to invest in them for safety purposes so you can have fun without worry and you don’t have to stand so vigilantly while your family is using the trampoline.

Below you can find some information that will help you in making a good choice.

So How do I Choose and Care for My Trampoline Nets?

Read the reviews and pay attention to the comments and tips made by those who use them. A trampoline net should be an important investment because you want something sturdy. the Jumpking trampoline is 15 feet and has four arches; the reviews are five stars and the user reviews and tips are good.

When you buy trampoline nets, other users say they tend to degrade over time in the sun and water. If you don’t plan to use them year-round, you can take them down and store them indoors.

Instead, you can also buy a sunscreen and waterproof block for your trampoline net.

On average, without this device, your trampoline net will last 4 to 6 months, but with it, they will last 2 years. This is a major adjustment and well worth the investment because your trampoline will last much longer. Get a very high quality water guard that will last three to four cans the first time you use it.

How Many People Can Safely Jump on the Trampoline at One Time?

It is recommended that only one person should be jumping on the trampoline at a time, and it should always be supervised. Most people would say that if it’s big enough and you have a trampoline net, two or more people should be able to use it, but the danger here is bumping into each other. The trampoline net will keep you together, but it won’t stop you from banging your heads together.

Most companies only sell 14 and 15 foot trampolines, so it makes sense for you to buy the same size trampoline net to cover them.

You can be sure you’re buying the right trampoline net if you measure directly in the center twice across, think north to south then east to west. You should especially do this if your trampoline is octagonal, and JumpKing has both products.

You also have the option of buying a net with a safety enclosure that is taller and has a greater curvature at the top. It also has two reinforcing bolts on each leg, which provides better reinforcement than just straps.

Following these simple guidelines and helpful review comments should help you have seamless shopping and assembly of your trampoline net.

ERWIN Wilson
View More Posts
Hi, I am Erwin. I'm 29 years old and am a giant sports fanatic. I play lots of different sports like gym, basketball, regular soccer and I do the occasional run. In my spare time, I try to help others become the best in their sports by providing tips and tricks.