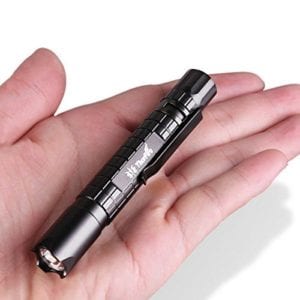 Tactical flashlights specifically designed for everyday carry use are extremely popular due to their rugged nature, higher light output and smaller size.

Most EDC Flashlights can fit in a pocket or when placed into an EDC bag, don’t take up much more space than a Crayola marker or two.

EDC Flashlights are very durable, with some being able to withstand substantial impact or a large vehicle rolling over them.

What Makes A Tactical Flashlight Different?

Tactical flashlights are a lot more durable than conventional flashlights. Most of them are waterproof and substantially shock proof.

Many tactical lights also have a higher light output, sometimes doubling or tripling the output of a conventional incandescent flashlight.

Tactical flashlights usually have a 1 – 8 hour runtime under normal use, however some of the higher power, smaller lights designed for EDC can give you as little as 15 minutes at their maximum brightness.

Most Tactical Flashlights Give You Multiple Lighting Options

While normal incandescent flashlights usually can only be on or off, some tactical LED flashlights can give you a number of different lighting modes. Most of the time, you’ll see a combination of the following modes:

The first three do exactly what you’d expect. In low mode, you’ll get the longest runtime (sometimes even days as opposed to hours), but you sacrifice the amount of light in doing so.

The Strobe mode is perfect for situations when you really have to get people’s attention. If your car breaks down on the highway in the middle of a lane, you would turn on strobe and point the light back at the oncoming cars to alert them.

The SOS mode is truly an emergency mode. It flashes S-O-S in morse code (three dots, three dashes, three dots) over and over to alert others that you’re in need of help.

If you’re wondering how many people would understand that this light sequence is a call for help, then rest assured that according to the American Preppers Network, over 70% of the US population over 18 years old realize that this means SOS and is a call for help.

As a side note, unfortunately, SOS is not taught as a regular part of the curriculum in schools anymore.

What To Look For In A Tactical Flashlight For Your EDC

There are thousands of different “tactical flashlights” available, but not all would be good for an everyday carry. 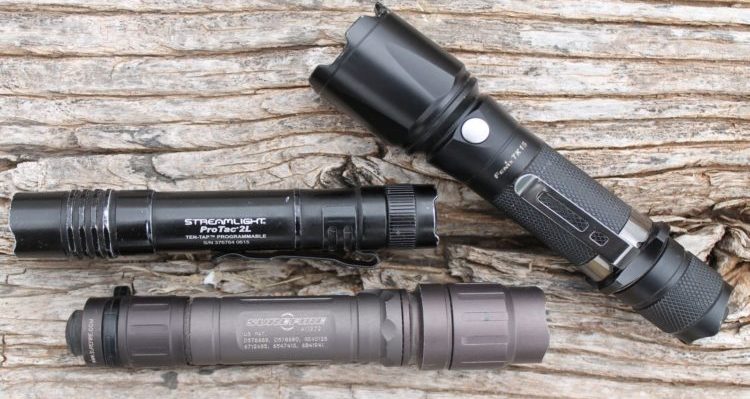 Remember that you’ll be carrying the flashlight with you at all times in your EDC, so having a big bulky Batman floodlight just isn’t going to cut it.

Generally speaking, a good rule of thumb to follow is that if the flashlight can’t fit comfortably in your front pocket, then it shouldn’t be your EDC flashlight (although it could be carried in a secondary bag that you might only take camping or hiking, for instance).

An EDC flashlight will generally be a AA or AAA battery sized flashlight. Some prefer longer pen style lights, while others like the single-cell tactical lights because they’re so much smaller.

If possible, get one that has at least a low and high mode. You can then switch between having a large amount of light when needed, or a long lasting run time in the event of prolonged darkness (such as a blackout).

While getting a water/weatherproof light isn’t necessarily a requirement, it is a good idea to look for this if the tactical flashlight may have to be exposed to the elements for a long time. Alternately, you could also carry a ziplock bag to put the flashlight in during adverse weather.

Lithium VS Alkaline VS Rechargeable Batteries

There’s not much to say about this that you probably don’t already know except for the fact that Alkalines will give you a slightly brighter light (If, and only if the flashlight’s power isn’t regulated), And lithium will give you the brighter light for longer than alkaline and rechargeable batteries.

Rechargeable batteries, on the other hand, save money, and can be reused over and over.

The light difference isn’t that noticeable anyway, and you don’t really lose that much time off the runtime either. We, at My Everyday Carry Gear, are stocked well on rechargeable batteries, but do keep two packs of four lithium AAA (Energizer) cells on hand as well if the rechargeables fail for some reason.